“It’s surely our responsibility to do everything within our power to create a planet that provides a home not just for us, but for all life on Earth.”

In a career spanning seven remarkable decades, Sir David Attenborough has travelled to countries far and wide, marvelling at the wonders of our natural world, and opening our eyes to what we must do to save it.

Sir David (or Saint David as we like to call him) has had a front row seat to the many miracles of our planet, but also the damage human activity has inflicted upon it.

“What humans do over the next 50 years will determine the fate of all life on the planet,” he says.

Our latest Power of Influence story celebrates Sir David Attenborough’s impact on how we see and experience our world, and the legacy he has built throughout his incredible life.

Who is Sir David Attenborough?

Sir David Attenborough is a man who needs no introduction. But for those of you living under rocks, he is a broadcaster, writer, naturalist and biologist, whose work has brought almost every corner of the world to our living rooms through the power of groundbreaking television.

Programmes such as Blue Planet, Africa and Planet Earth have led him to become heralded as an absolute, undisputed national treasure, and king of the modern day nature documentary.

Even as a child, Sir David Attenborough was fascinated by science and nature. Growing up in Leicester, he would collect fossils and rocks as he went searching for wildlife, and his passion continued all the way through to Cambridge University, where he studied Natural Sciences.

In 1952, Sir David joined the BBC as a producer. Two years later, he began a series called “Zoo Quest”, the success of which opened the door for more educational, nature-themed programming.

He continued to have a major influence as Director of Programmes at the BBC, before resigning to focus on writing and produce his own material, most notably the award-winning ‘Life’ series, which aired between 1979 and 2008.

Sir David Attenborough has won many well-deserved accolades and awards, but his most notable one came in 1985, when he was given his knighthood.

Sir David Attenborough’s work and endless desire to explore has inspired millions of people all over the world.

From the depths of the Great Barrier Reef to jungles, African plains and previously unexplored islands, what were once unchartered territories and never-been-seen spectacles have become accessible at our very fingertips.

Never have we been more aware of the beauty in our natural world, and by bringing the rarest of animals and most wonderful of wildlife to our screens, Sir David Attenborough has given humanity the kick up the backside it needed to preserve our magnificent planet.

It’s estimated that a whopping 88% of viewers changed their lifestyle after watching Blue Planet.

Sir David Attenborough has held and shaped the lens with which we marvel at nature. And he has showcased the world in such a way that doesn’t scare us into action, but moves, inspires and motivates us towards preservation.

We could write a book of quotes from Sir David Attenborough, and we’d still only be scratching the surface. So, here are just a few of our all-time faves:

The inspiration behind our milkround

Our founders were four of the many millions of people compelled to fight the growing risks our planet faces, after watching Sir David Attenborough’s Blue Planet series.

Heartbroken and shocked by the awful footage of plastic floating in our oceans, they set in motion plans to spark a consumer movement, where waste is banished to Room 101, and plastic free packaging becomes the norm.

Read our story to learn the role Sir David Attenborough played in the creation of our green milkround, and how our produce has helped customers save over 37 million plastic bottles.

How you can inspire others to save the planet

“Immensely powerful though we are today, it’s equally clear that we’re going to be even more powerful tomorrow. And what’s more there will be greater compulsion upon us to use our power as the number of human beings on Earth increases still further. Clearly we could devastate the world. As far as we know, the Earth is the only place in the universe where there is life. Its continued survival now rests in our hands.”

There’s no mistake that we have the power to influence life on planet earth. And not just our own. The 150 million metric tons of plastic in our ocean is an horrific showcase of that.

But amidst the scary statistics and shocking footage, there is beauty and awe. For every desolate scene of a fish caught in plastic, there is a breathtaking shot of a whale soaring above the waves. It’s our responsibility to ensure the future holds much more of the latter.

Every piece of litter or devastating headline we see feeds our motivation to be a part of the solution. The average Modern Milkman customer saves over 100 plastic bottles every year, and this makes a massive difference to the planet we call home.

The more people saving plastic with our sustainable, eco-friendly groceries, the more room our planet has to flourish and thrive.

Already signed up and enjoying our scrumptiously sustainable produce? Good for you! Have you tried referring us to your loved ones to further increase your positive impact? Remember, recommending the milkround is mending the planet!

Learn more about the power of influence

Wondering who else inspires us and our eco mission? Explore our other Power of Influence blogs below! 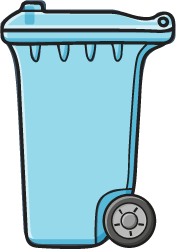